How the pandemic affected employment by different sectors / industries …

Although we recently looked at the changes the pandemic had on the number of jobs in general and specific sectors, we repeat that examination for some different sectors this month with many that are especially relevant to the staffing and IT staffing sectors. And for comparison, we also look at the changes in the general labor employment as well as focusing on some sectors that have been especially hard hit by the pandemic, but may not necessarily be staffing-centric. 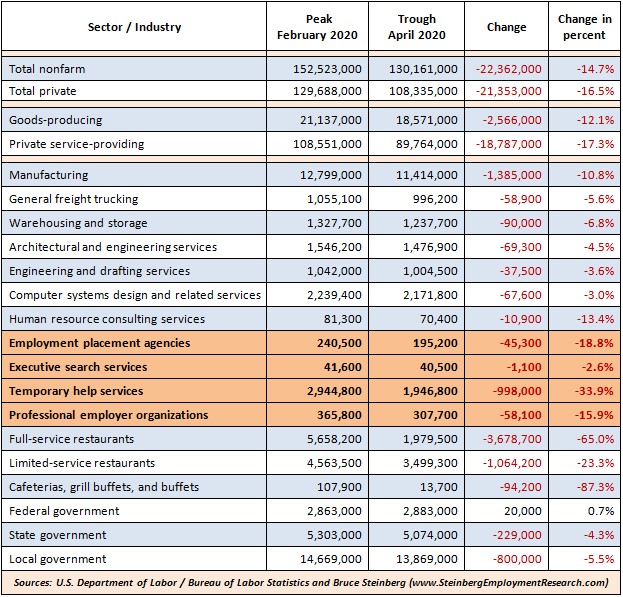 The first table shows the changes made from before the pandemic hit in February 2020 that was the peak for employment in most sectors to when the largest jobs losses occurred in April 2020 that was the low point or trough last year. The second table shows the changes from the peaks and from the troughs to December 2020, the last month of the year.

Specifically, the number of all private-sector jobs dropped 16.5 percent from a peak in February 2020 to the trough in April 2020 (first table) but was still off 6.6 percent by December 2020 (second table) from its peak.  However, all private sector jobs have increased 11.8 percent from the trough in April 2020 at the end of the year in December 2020 (second table).

Before we discuss the performance of some staffing-centric sectors, it’s interesting to see what has occurred in some of the restaurant sectors, which has been especially hard hit by the pandemic. Full-service restaurants were down 65.0 percent from peak to trough and were still down 24.3 percent from the year’s peak, but recovered 116.3 percent from the year’s trough. Regardless that it is a fairly small sector, cafeterias, grill buffets, and buffets — many of which have closed their doors because of the pandemic — were 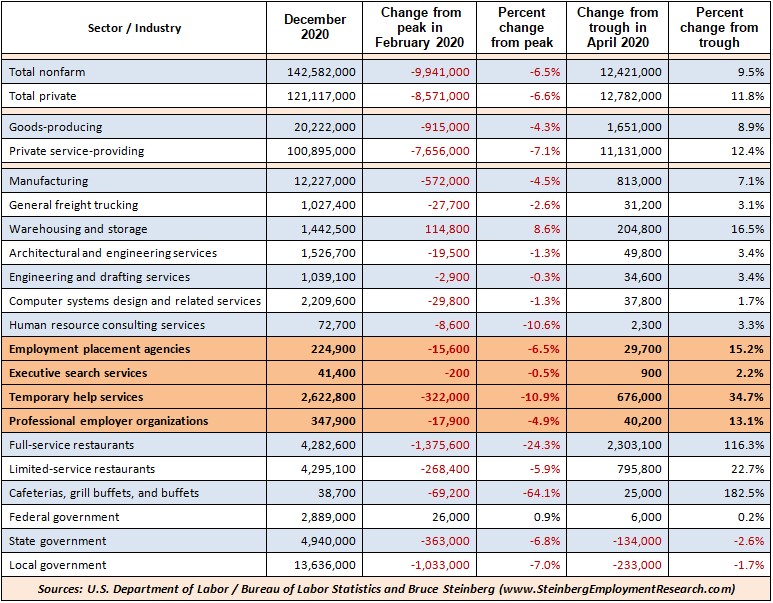 Since we have faith in our readers are educated enough to be able to read these tables we will limited our verbiage to discussing the general trends and leave out the specific numbers from this point onward.

The private services-providing was hit harder by the pandemic than the goods producing sector, which is essentially all private (unless one considers producing red tape by government entities as “goods producing”). With that said the federal government was one of only a few sectors that did not lose jobs during the pandemic.

Within the staffing industry, executive search barely lost its mojo due to the pandemic. Temporary help services, which we have been reporting about in detail all along, fell off the cliff in early 2020 had made a nice recovery by the end of the year.

And if the percentage changes in temporary help services looks familiar to you, they are. Those numbers sort of mirror the changes in GDP, but along a different timeline. In Q2 2020, GDP dropped 31.4 percent and recovered with growth of 33.4 percent in Q3 2020. This is strictly a coincidence, but interesting nevertheless.

Did you see it?

Two days ago the Federal Reserve Bank published its March edition of its round-up of the local economic and employment situation from each of its12 district banks. It includes many comments about the staffing and IT services situation and how some of those business are dealing with today’s challenging business environment. Check it out by clinking here.

The employment economy continues to recover from December’s loss of 306,000 nonfarm jobs.

The unemployment rate improved to 6.2 percent in February from January’s 6.3 percent; a year ago in February 2020 it was 3.5 percent.

Average hourly wages were up seven cents in February after rising only three cents in January, but were up 30 cents in December. However, the Bureau of Labor Statistics specially points out, “The large employment fluctuations over the past year — especially in industries with lower-paid workers — complicate the analysis of recent trends in average hourly earnings.”

And Temporary help services has now added jobs for the tenth consecutive month in February. It has recover more than 820,000 jobs from its pandemic lost of almost 950,000 in April 2020.

The Bureau of Labor Statistics reports that the economy added 465,000 private-sector jobs in February after increasing by only 90,000 in January, which was initially reported last month as an increase of only 6,000.

The private Goods-producing sector declined by 48,000 in February after contracting by 13,000 in January

The private Service-providing sector added an astonishing  513,000 jobs in February after only increasing by 103,000 in January but that followed a decline of 356,000 jobs in December.

Temporary Help Services continued expand at a more moderate pace  in February with an increase of 52,700 that works out to a 1.9 percent sequential increase, but “only” a 5.9 percent year-over-year decline to bring the total number of temporary help services jobs to 2,769,700. As encouraging these trends may appear, the last time it was at this level — it has been above it — was in July 2014.

For a chart of temporary help’s growth from January 1991 to February 2021 and comparing its trend to total employment, click here.

The unemployment rate inched lower in February to 6.2 percent from January’s 6.3 percent.

Although the labor force grew by only 50,000, there were 208,000 more employed persons and 158,000 fewer unemployed persons in February. The workforce participation rate was unchanged at 61.4 percent while the employment-population ratio ticked up to 57.6. Those considered as not in the labor force increased by a nominal amount of 18,000.