How the pandemic affected unemployment by gender …

There’s a subject that is only now starting to be examined and reported in the media in earnest … how the pandemic has impacted the employment status of women.

The unemployment rate for women and men has basically been about the same for some time. Conveniently — for our purposes — in March 2020, which was prior to the pa 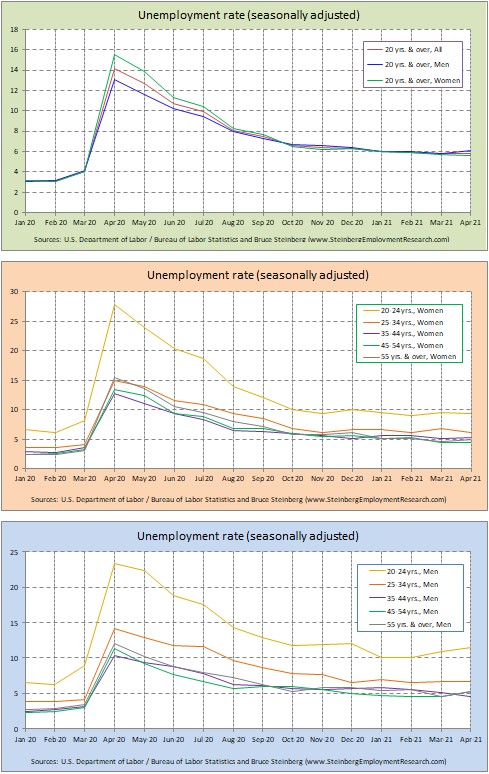 ndemic impacting employment, the unemployment rate was the same for men and women at 4.0 percent.

Although COVID-19 has been hard on all working people, women were and are more negatively affected.

Breaking out unemployment rate by different age cohorts yields predictable results with younger persons taking the bigger hits regardless of gender on the job front likely because they are in lower wage jobs.

Although many smaller services businesses — think local restaurants (aren’t all restaurants basically local businesses?) as one example 00 have permanently closed, it will be some time before those jobs return and those businesses are reestablished.

In addition, forward-thinking businesses are taking advantage of the slowdown and trimmed down its workforce to automate processes where and when possible to be more productive. So even when activity returns to pre-pandemic levels, they will likely need fewer workers.

Employment and job numbers continue to improve in October but at an uneven rate.

The economy added a total of 638,000 nonfarm jobs in October, despite a big drop of 268,000 government jobs due to the discharging of Census 2020 temporary workers as well as declines in public education (more detail below). A year ago in October 2019, it added 185,000 jobs.

Average hourly wages were up four cents an hour in October. The previous month, they rose only one cent but in August they increased 10 cents from July.

And Temporary help services has now added jobs for the sixth consecutive month in October up  five times its increase in September.

The Bureau of Labor Statistics reports that the economy added 906,000 private-sector jobs in October that was slightly lower than the 892,000 gain of September; it increased 1,028,000 in August.

The private Goods-producing sector was up 123,000 in October, which was a nice improvement from the 97,000 added in September as well as the 53,000 increase of August.

Temporary Help Services continued to add jobs and at a faster pace with a gain of 108,700 jobs in October after adding only 21,800 in September. This brings the total number of THS jobs to 2,597,100, which works out to a healthy 4.4 percent sequential increase, but still down 11.8 percent from October 2019.

Note that Temporary Help Services has added almost 550,000 jobs since April when it plunged by 840,500 jobs from the previous month.

For a chart of temporary help’s growth from January 1991 to October 2020 and comparing its trend to total employment, click here.

Although BLS is still experiencing COVID-19 related errors with the data [emphasis is ours — ed.]. ” … analyses of the underlying data suggest there still may be some workers affected by the pandemic who should have been classified as unemployed on temporary layoff. However, the share of responses that may have been misclassified was highest in the early months of the pandemic and has been considerably lower in recent months.”

Officially, the unemployment rate in October was 6.9 percent and that is lower than the published September rate of 7.9 percent.

The labor force participation rate increased 0.3 percentage points to 61.7 percent in October from September and the employment-to-population ratio was up 0.8 to 57.4 percent.