We started this year with our report of the December 2020 employment situation looking at how some staffing-centric industries / sectors have recovered — or had started to recover — from the massive loss of jobs due to the pandemic. As we close out the year, we thought another follow-up to these trends are in order. Keep in mind that this section of our monthly employment report is prepared prior to the publication of the November employment and jobs data so this analysis runs to October.

[Note: depending upon how well your browser and / or email program renders this chart, it may be difficult to view; we suggest you click on it to open a larger version.]

All but one of the limited sectors examined were still down in October 2021 from their respective peaks of February 2020 sans one — computer systems design and related services is up 50,600 jobs, or 2.3 percent.

Food services and drinking places were the hardest hit by the pandemic in terms of the number of jobs that declined nearly fifty percent from peak to trough and was still down 6.4 percent, or around 784,000 jobs, in October 2021 from its February 2020 peak but is up 82.0 percent from its April 2020 trough.

Clearly, temporary help services was hit very hard in April 2020 with a 33.9 percent decline from its peak two months earlier in February 2020, and by October 2021 it was up 42.4 percent from its April 2020 trough. But temporary help services was still down 5.9 percent in October 2021 from its February 2020 peak, so there appears to still have some room to grow.

Although the first affect of the pandemic on the employment and jobs data may had first been seen in March 2020, the major impact did not occur until the following month. This is because the survey week is mid-month.

Regardless, the pre-pandemic levels of these two metrics have pretty much returned to their pre-pandemic relationship, but not levels.

For the past six months (May to October 2021), the average number of workers on temporary layoffs was almost 1,384,000 and those who report they permanently lost their jobs was just a little greater than 2,702,000. For the same six-month time period in pre-pandemic 2019, just over 830,000 workers said they were on temporary layoff and 1,303,000 said they permanently lost their job.

Interestingly, the ratio between these two sets of workers — and it should point out that these statuses are self-reported so those who report they were on temporary layoff may have, in reality, been permanently laid off or vice-a-versa, which is why we used the words “report” and “said” — was 1.6 in 2019 meaning for every one workers on temporary layoff, there were 1.6 who permanently lost their job; By October 2021, the ratio had risen to 2.0. A preliminary conclusion is that employers are lowering their permanent staffing levels and the reasons for that development are numerous — more numerous than will be addressed here.

The unemployment rate plummeted — yes, we said plummeted — 0.4 percent to 4.2 percent in November. However, the number of nonfarm jobs for the past several months was up only 210,000 in November, which was below consensus expectations as well as October’s gain of 546,000.

Average hourly wages were up eight cents in November, which was a 0.3 percent increase; in the last 12 months, hourly wages are up 4.8 percent.

Temporary Help Services experienced only a moderate increase in November but October was stronger by about ten percent than previously reported.

Temporary Help Services appears to be on a consistent, but decelerating, trend but with a gain of only 6,200 jobs in November, which was a meager 0.2 percent increase form October, but up a respectable 9.1 percent from a year earlier. Revised data show that the sector added 46,400 in October and 14,900 in September; a year earlier in November 2020, it increased 39,000.

For a chart of THS jobs compared to all nonfarm jobs, click here.

(if charts are unclear, click on it to open in a browser window) 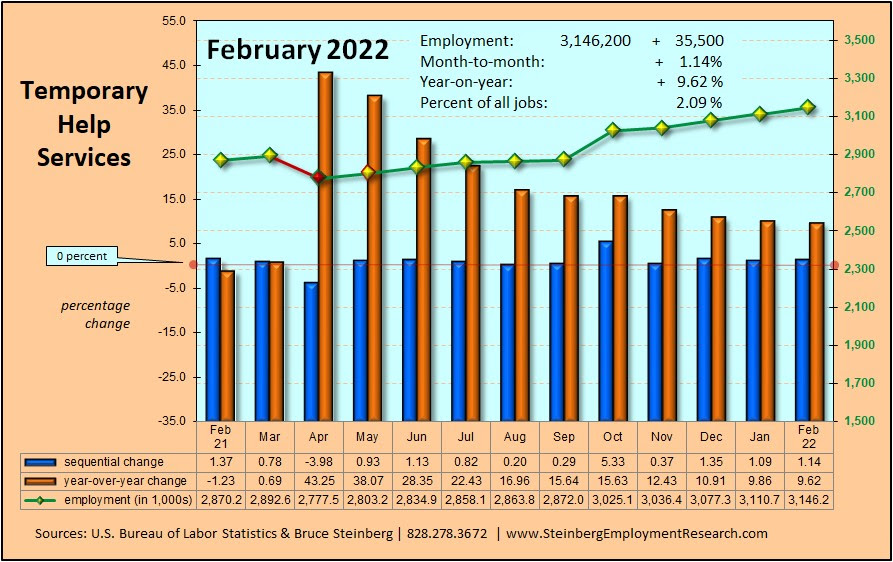 The unemployment rate fell 0.4 percent to 4.2 percent in November.

The labor force grew by 594,000 while there were 1,136,000 more employed persons, and 542,000 fewer unemployed persons. In addition, the workforce participation rate increased 0.2 to 61.8 percent and the employment-population ratio jumped 0.4 to 59.2. Those considered as not in the labor force declined by 473,000. We cannot help but speculate could the ending of the enhanced unemployment benefits have moved people off their couches and into the workplace? BTW, the number of people filing for unemployment benefits for the first time last week was at a lower level than before the pandemic. For a chart of this, click on my Twitter.