Another way to look at those who are on temporary layoffs compared to permanent job losers.

Several times during our pandemic-related analyses, we examined the different 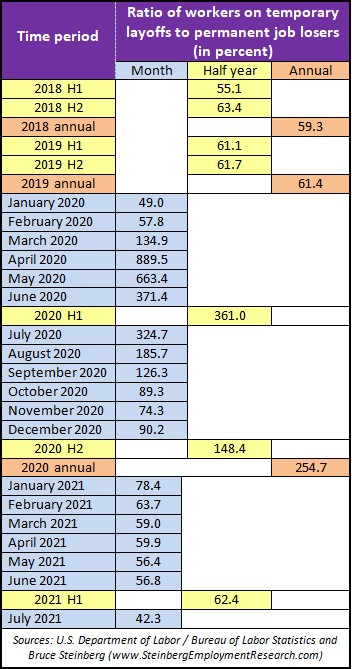 trends with those on temporary layoffs and those who permanently lost their jobs. More importantly, how are they changing.

This month instead of emphasizing the actually numbers of workers in each of these cohorts, we take a deeper dive into the ratio between them expressed as a percentage. It may be helpful to review the actual meaning of “percent” … and we do not have to go any further than reminding it is a ration of the “portion of one hundred.”

During the initial impact of the pandemic on the employment economy, the situation reversed — and very abruptly and by a large amount. In April 2020, there were almost 890 workers on temporary layoffs for every 100 who permanently lost their jobs. Reduce and round it down further, there were almost nine workers on temporary layoff for every single worker who permanently lost a job.

As we have pointed out before, it is important to keep in mind that these data are self-reported so it is not really known if people were really on temporary layoff or it was just wishful thinking or employers were not being honest, or possibly knowing, and dangled the prospect that furloughed workers will be the first to be rehired. In addition, the Paycheck Protection Program — a.k.a. PPP loans — that subsidized firms to keep laid-off personnel on their payrolls possibly encouraged some employers to report as “temporarily” laid-off employees that realistically had no chance of being brought back.

Much as been reported — and essentially correctly — that the pandemic had a disproportionate impact on lower-wage, lower-skilled service jobs and did not have such a large affect on higher-wage, higher-skilled professional jobs.

But in July — the latest figures available at this time — the ratio plunged to 42.3 percent. likely an indication that many of the jobs that were lost to the pandemic are returning and remain in the employment economy.

So if many of the people who lost jobs during the pandemic are coming back, why is the widespread labor shortage persisting?

Keep in mind that this information is just from people who lost jobs — and for those who are currently losing jobs, although there is a declining number of than them, also feel that their personal job loss is not temporary.

Although the unemployment rate dropped 0.2 percent to 5.2 percent in August, the total number of nonfarm jobs increased only 236,000 after expanding by 1,053,000 in July and growing 962,000 in June. We offer an explanation of the August decline in the unemployment rate within an environment of relatively weak overall job growth in the Household Survey section, which is at the end of this section.

Although the expression that “what goes up, must come down” may no longer be true with today’s advancement in space exploration, it does apply to Temporary Help Services. With a decline of 5,800 jobs, the total number of THS jobs in August 2021 was 2,682,600, or a 0.2 percent sequential decline. But, like the Schroeder’s cat thought experiment, which in my opinion is really more of a paradox, it also grew at the same time by increasing 12.7 percent from August 2020.

For a chart of THS jobs compared to all nonfarm jobs, click here.

The unemployment rate declined percent to 5.2 percent in August 2021 because more people were employed and fewer people were unemployed and while the entire labor forced grew, it was by a relatively small number.

The labor force expanded by only 190,000, there were 509,000 more employed persons, and 318,000 fewer unemployed persons. The workforce participation rate was unchanged at 61.7 percent and the employment-population ratio moved up 0.1 to 58.5. Those considered as not in the labor force declined by 49,000. So, with more people employed and fewer people unemployed, because the labor force did not expand by a lot, the unemployment rate declined despite weak, overall job growth.