Are jobs and employment going sideways … or just returning to “normal”?

Several times last year during the pandemic — the last time was with the August 2020 employment report — we looked the different trends with those on temporary layoffs and those who permanently lost their jobs.

Regardless, those on temporary layoffs clearly skyrocketed at the onset of the pandemic and remained at a much higher level than pre-pandemic. Although the level has come down rapidly, it is still higher. The average number on temporary layoff per month from January 2019 to February 2020 was just under 805,000 before radically rising and then dropping; by May 2021, it was to a little more than 1,800,000, which is the first time it was under 2,000,000 since the pandemic.

For those who have permanently lost their jobs, the pre-pandemic level was just under 1,340,000 and gradually rose, albeit not as dramatically, during the pandemic and by May 2021 was a little more than 3,230,000.

It is important to keep in mind that these data are self-reported so it is not really known if people were really on temporary layoff or it was just wishful thinking or employers were not being frank and dangled the prospect that furloughed workers will be the first to be rehired. In addition, the Paycheck Protection Program — a.k.a. PPP loans — that subsidized firms to keep laid-off personnel on their payrolls possibly encouraged some employers to report as “temporarily” laid-off employees that realistically had no chance of being rehired. 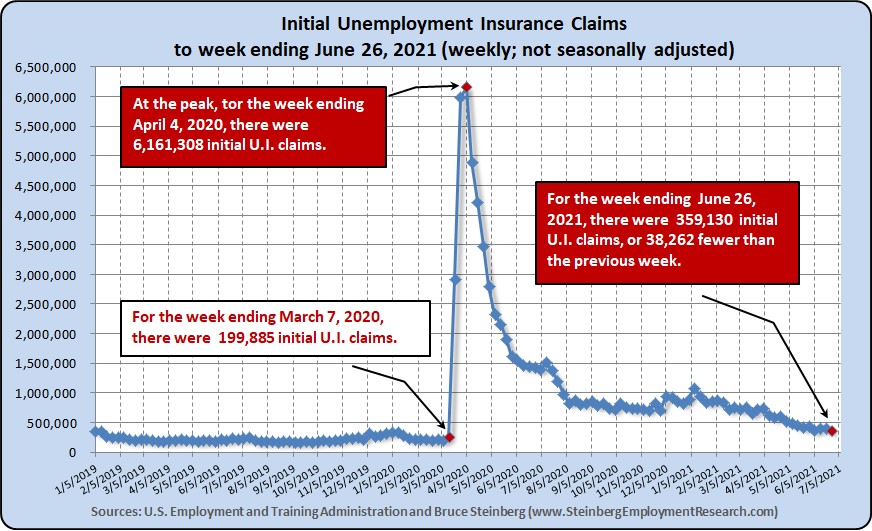 The number of initial unemployment claims continued to declined last week by slightly more than 3.5 times the decline of the previous week. BTW, the Labor Deportment changed the seasonally adjustment methodology because of the pandemic, which is why we report the not seasonally adjusted data for this series.

And now, a not rocket-science conclusion:

To state the obvious, these two charts look very similar. Fewer people on either temporary layoff or permanently lost their jobs tracks similar to the trends with the number of people filing initial unemployment insurance claims, but still at greater levels than before the pandemic.

The unemployment rate drifted higher in June to 5.9 percent; a year ago as the full effect of the pandemic was hitting the employment economy, it was 11.1 percent. The unemployment rate increased because the number of employed persons declined — albeit marginally — and the number of unemployed persons rose. But here is some very interesting: overall job growth was relatively strong with a reported increase of 850,000, but that includes a 193,000 job boost at the state and local government levels. This inverse situation does not occur very often, but it’s not unprecedented. Read further in for the explanation.

Average hourly wages were up 10 cents in June after rising 23 cent in May. Again, the Bureau of Labor Statistics only slightly updated its statement from the previous month’s employment situation, “The data for recent months suggest that the rising demand for labor associated with the recovery from the pandemic may have put upward pressure on wages.”

And Temporary Help Services reversed three consecutive months of declines — although quite minor in two of those three months — with a relatively solid gain in June.

The private Goods-producing sector added 20,000 jobs in June after increasing by a similar 19,000 in May.

The volume continued to increase in private the Service-providing sector that added jobs to the tune of 642,000 in June after adding 497,000 jobs in May. A year ago the chorus increased by 4,302,000 jobs.

Temporary Help Services finally experienced some solid growth with an increase of 33,000 in June that brings the total number of jobs to 2,666,300, which works out to a 1.3 percent sequential increase. May initially reported growth of 4,400 last month but was revised in the current data release to a decline of 6,500 jobs. Despite the ongoing recruiting problems and the skills mismatch, it remains encouraging to see that the sector is up 24.2 percent with 519,200 more jobs year-on-year.

The unemployment rate marginally increased to 5.9 percent mainly because more people were considered as unemployed than the number the labor force increased.

The labor force expanded by 151,000 but there were 18,000 fewer employed persons and 168,000 more unemployed persons. The workforce participation rate was unchanged at 61.6 percent while the employment-population ratio was also unchanged at 58.0. Those considered as not in the labor force declined by 22,000. In June, many people returned to the workforce  but since not all of them could secure a job immediately, the unemployment rate bumped up. The question remains as the rich unemployment benefits expire, how quickly will those returning to the labor force will be able to find jobs.

It does seem like a contradiction with a fairly strong increase in the number of jobs that the unemployment rate and its underlying components were so weak. But these data come from completely different sources and surveys that measure much different aspects of the jobs and employment economy.