How the pandemic affected employment by ethnicity …

We closed out 2020 by looking at how the pandemic has impacted the unemployment experience by gender in November and by race in November. This month we look at the impacted it has had on the Hispanic or Latino populations and further by age group and gender.

As the first chart shows that prior to the pandemic, the unemployment rate for all Hispanic or Latino men and women was higher than for the overall unemployment rates for the same cohorts, but not my much. [note: unemployment rates for non-Hispanic and non-Latino are not available by different age cohorts. Also, although it may be technically and / or politically more correct to refer to women as Latina, we report these data by the official Bureau of Labor Statistics labels.] 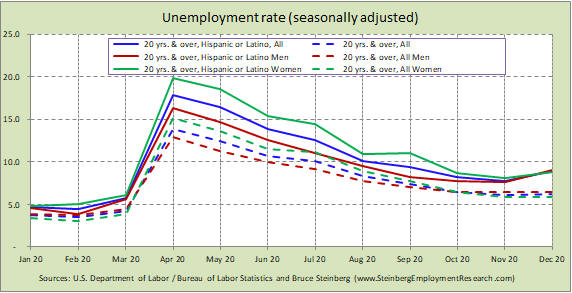 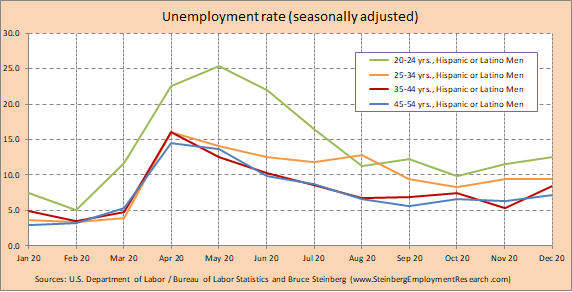 Drilling down further into gender and different age cohorts, it’s understandable that the youngest group for both Hispanic or Latino men and women — 20-24 years old — would have the highest unemployment rates. Interestingly though, the  unemployment rate for Hispanic or Latino women in this age cohort peaked in April at 31.5 percent whereas the rate for men in this same age group did not peak until the following month in May at 25.4 percent. 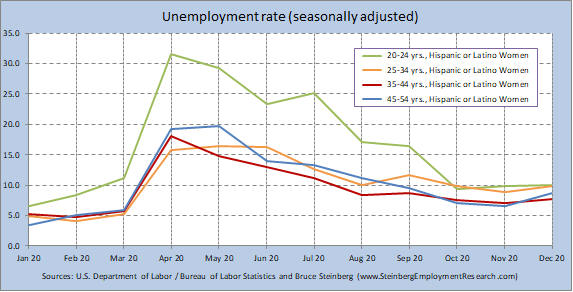 What the immediate future holds for employment trends remains unknown because the future direction of the pandemic is also unknown, but as vaccinations increase, it is expected to slowly decline. However, the ultimate impact of COVID-19 variants is creating more questions of how the virus will progress.

Despite recovering from December’s loss of more than 200,000 jobs and the January 2021 unemployment rate possibly declining, overall job growth was weak; annual revisions to the jobs data show the employment situation was worse last year than previously reported.

The unemployment rate probably improved to 6.3 percent in January. We say “probably” because updated population estimates to earlier data make comparisons sketchy at best. It was 6.7 percent in December as well as November.

Average hourly wages were up only six cents in January after rising 29 cents in December and increasing 12 cents in November.

And Temporary help services has now added jobs for the ninth consecutive month in January and at a much higher rate than in the previous month. However, according to the previously mentioned annual revisions to the data, 2020 was worse than previously reported.

The private Service-providing sector added only 10,000 jobs in January with growth dragged down by a several sectors. However, January was an improvement from the previous month of December when it declined by 280,000, which was almost a full reverse of the 291,000 it added in November.

Temporary Help Services continued to add jobs and picked up the pace with an increase of 80,900 more jobs in January than December when it added 64,300. This brings the total number of THS jobs to 2,703,700, which works out to a 3.1 percent sequential increase, but down 8.3 percent from January 2020.

Note that Temporary Help Services has added almost 760,000 jobs since April 2020 when it plunged by almost 950,000 from the previous month.

With the 2020 jobs data almost finalized — December 2020 numbers are still considered preliminary — temporary help services can now be reported as down 16.3 percent in 2020 from 2019. For a chart of temporary help’s growth from January 1991 to January 2021 and comparing its trend to total employment, click here.

Due to annual revisions / adjustments made to the population controls, making month-over-month comparisons are sketchy at best, we will dispense with comparisons between January 2021 metrics and earlier numbers; we’ll pick up that discussion next month.

With that said, the official unemployment rate in January was 6.3 percent, which may have been an improvement from the 6.7 percent calculated in December.