In the final month of 2019, the labor market remained strong holding it’s unemployment rate at historic lows despite seeing a decrease in total number of jobs compared to December 2018. According to last months job reports data, Bruce Steinberg finds that the threat of recession in the near future has been downgraded, please refer to charts and explanations provided in the report.

The December Employment report has detailed updates on job trends in all sectors. Send it to your staffing colleagues to keep your team up to date:

The unemployment rate was 3.5 percent in December 2019, the lowest it has been since, well,  December 1969. The number of employed persons increased, the number of unemployed persons decreased, and the size of the labor force increased…see the Household Survey section below for more details and explanations.

The total number of jobs increased 145,000, which is a disappointment from the 256,000 increase in November (however, the November number was affected by about 50,000 GM workers who returned from a strike); a year ago in December 2018, overall jobs increased by 227,000.

Overall private-sector hourly wages were up only 0.11 percent in December, or three cents, from November and up 2.87 percent, or 79 cents, from December 2018; both gains in hourly wages are slightly lower than recent trends.

And Temporary help services rose in December and October’s figure, which was revised as an increase last month was revised to a decrease.

Private-sector jobs were up 139,000 in December, which was below November’s gain of 243,000. As discussed above, the November figure was artificially high because of striking GM workers returning to work who were not included in the October data.

The total number of Government jobs was up 6,000 in December. The federal government was flat, state government down 8,000, and local government added 14,000.

The number of temporary help jobs in December was 3,043,300 and that works out to a 6,400 gain and a 0.2 percent increase from November but a 0.5 percent year-over-year decline. Interestingly, October was initially reported as a decline, then revised to an increase last month, and now is being reported as a decline again.

For a chart of temporary help’s growth from January 1991 to December 2019 and comparing its trend to total employment, click here.

Although monthly data will not be finalized until next month, below is the annual change for temporary help services from 2000 to 2019 based on the preliminary information.

Based on currently published information, which will be revised next month with the publication of the January 2020 data, temporary help services was able to eke out a positive performance for 2019 on an annual basis by expanding 0.7 percent compared to an increase of 2.5 percent in 2018 from 2017. 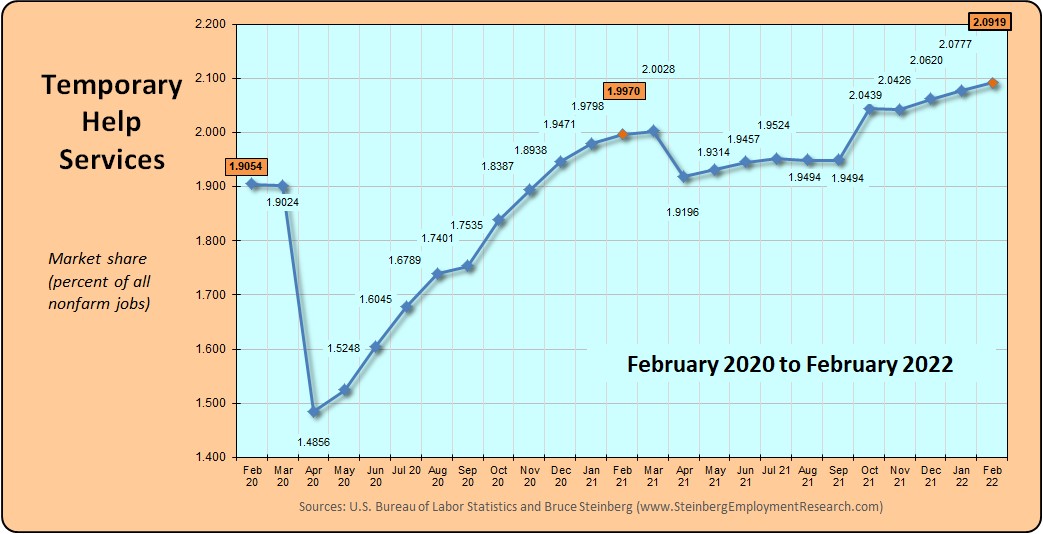 The unemployment rate remained at a 50-year low at 3.5 percent in December, mainly due to the labor force growing slower than people are getting hired.

The labor force participation rate was unchanged at 63.2 percent in December and the employment-to-population ratio was also unchanged at 61.0 percent from the previous month.

BTW, we maintain an updated table of many major employment as well as other economic indicators here or here for the mobile version.

Time to Change Thinking About A Recession? 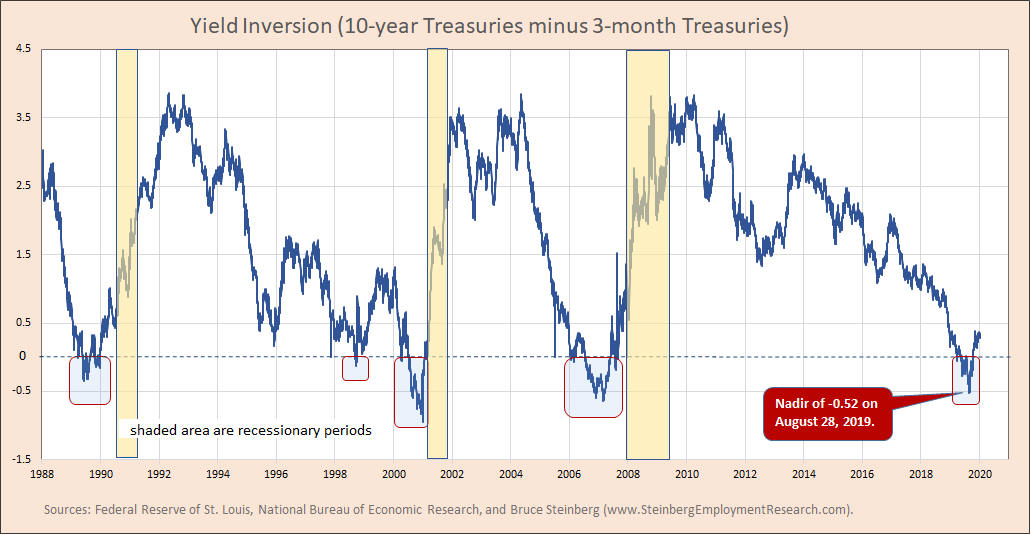 In 2019 the Federal Reserve Board — possibly because they felt the risk of a recession was increasing — stopped raising interest rates and then started to lower them. Recession averted? Maybe.

As the chart for the ten-year and the three-month treasuries shows, an inversion started in late March 2019 and lasted more than six months before eventually ending in early October 2019 and reached its low point on August 28, 2019. 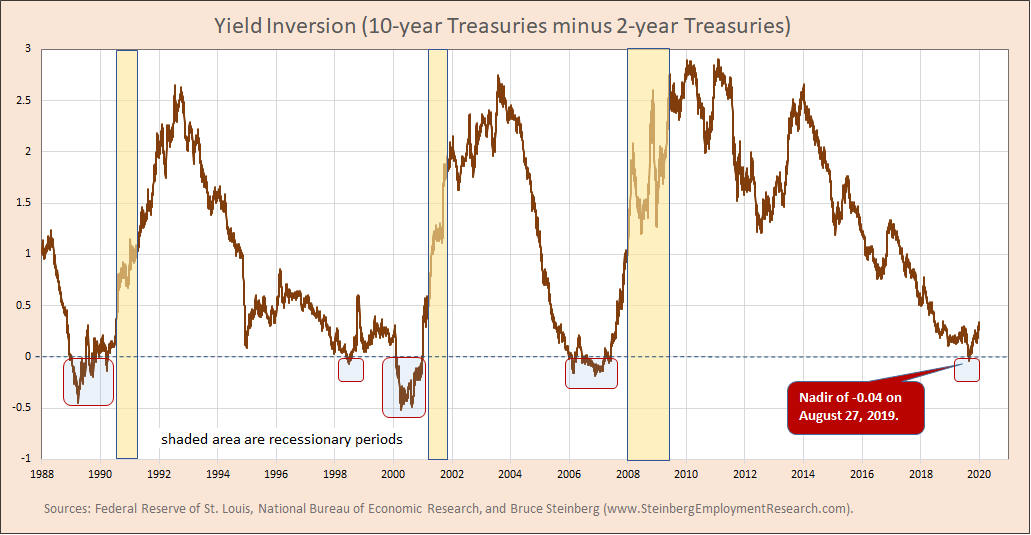 The inversion for the two-year treasuries performed fairly similarly, but occurred only for three days in late August and reached its low point on August 27, 2019, but was barely an inversion by historical standards.

There are also exogenous recessions, which is when some outside force or forces knock the economy down with a body-blow. The multiple oil crises of the 1970s are good examples as well as current international trade and tariff issues and the current Middle East situation.

By most accounts and indicators, the economy is expected to continue to grow and a recession in 2020 is unlikely at this time but if one occurs, it is expected to be mild. The consensus estimate for GDP growth will be slower than in 2019 and dip below 2 percent in 2020, absence of traditional “election year pump-priming” or other currently unforeseen geo-political developments.